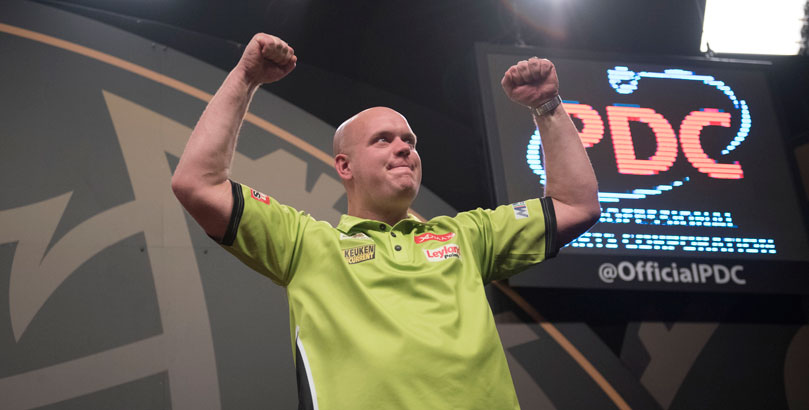 The final night of this year’s Premier League takes place at the O2 Arena in London on Thursday night.

League winner Michael van Gerwen meets Gary Anderson, in a repeat of the 2015 final, while Phil Taylor faces Peter Wright on what is his last night of Premier League action before retirement.

Here are our two Premier League darts predictions, which you can get at 18/1 for the double.

When the pressure was on Van Gerwen, following a defeat to Taylor in Sheffield and a 6-0 whitewash by Wright in the final of the European Darts Grand Prix, he delivered against Anderson in Aberdeen. A 7-4 win saw him claim the £25,000 league winner’s bonus ahead of Wright and set up another clash with Anderson. Van Gerwen has triumphed in all four of his semi-finals in this competition, compared to Anderson winning two of his four last-four appearances, and the Dutchman is expected to advance to a fifth consecutive final. Anderson has a brilliant record in finals, lifting the trophy in both his appearances in 2011 and 2015, but the hardest part for him will be getting there.

Wright has taken his game to another level this year but is breaking new ground at the O2 having never advanced past the group stages in his previous three attempts. In contrast, six-time Premier League winner Taylor has won eight of 11 semi-finals and will be fired up in what could be his last match in the competition. Wright will not be overawed by facing Taylor after losing just one of their seven Premier League meetings but Taylor has shown in the last few weeks with four wins in five matches that he means business and his experience could be a major factor in a close encounter.

MVG remains the man to beat on the big occasion and it is hard to look past him lifting a third Premier League title. He will relish another final showdown with rival Taylor, who he thrashed 11-3 in the showpiece 12 months ago. Taylor will be desperate to end his Premier League career with another piece of silverware but despite his recent win over van Gerwen in Sheffield, his dream will be ended as ‘Mighty Mike’ prevails by five or six legs.