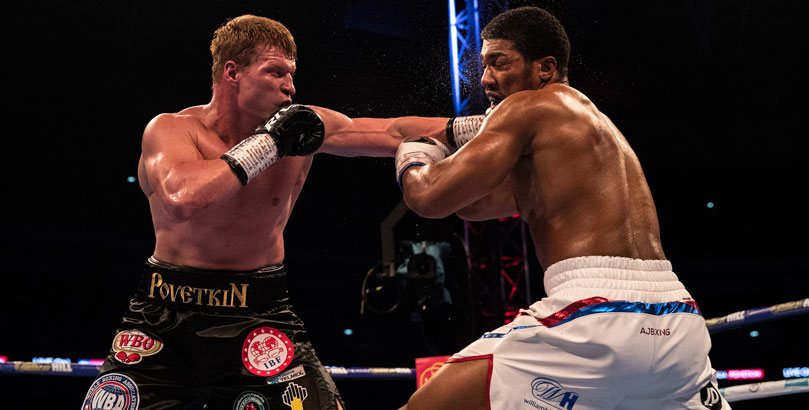 The 24-year-old cousin of lineal heavyweight champion Tyson has moved himself back into world title contention once again with an impressive victory over veteran Samuel Peter in Saudi Arabia in July.

Fury’s first opportunity for world honours came in September 2017 when he fell to a majority decision defeat to Joseph Parker, who later lost his WBO heavyweight strap to Anthony Joshua.

Fury suffered a setback in October last year when Bulgarian Kubrat Pulev, who was forced to pull out of a world title bout with Joshua in 2017 through injury, claimed a unanimous decision victory in Sofia.

However, convincing wins over Canadian Chris Norrad and Peter has propelled Fury in the right direction and we reckon the Briton can prevail on home soil against the 39-year-old at 3/2 for our Povetkin vs Fury prediction.

Russian to be caught cold again?

The Joshua link continues in this bout as Povetkin’s last fight was nearly a year ago during the brutal seventh-round TKO defeat in Cardiff.

Povetkin has had a distinguished career and will prove a stern test for the Briton despite the 15-year age gap between to the two fighters.

The Russian has a 34-2 record with 24 knockouts so Fury will be wary of Povetkin’s punching power and sustainability.

Povetkin won the WBA heavyweight title against Ruslan Chagaev in August 2011 before losing the belt to Wladimir Klitschko less than two years later when he went the distance before suffering a heavy loss to Joshua in 2018 – the only two defeats in his career.

With this in mind, our next selection is for the fight to go to 12 rounds.

Memories of that brutal knockout could be a factor in London with Fury confident of going the distance himself.

In both his defeats, Fury has lasted 12 rounds on each occasion and we finish off our Povetkin vs Fury betting tips with the Briton winning on points.