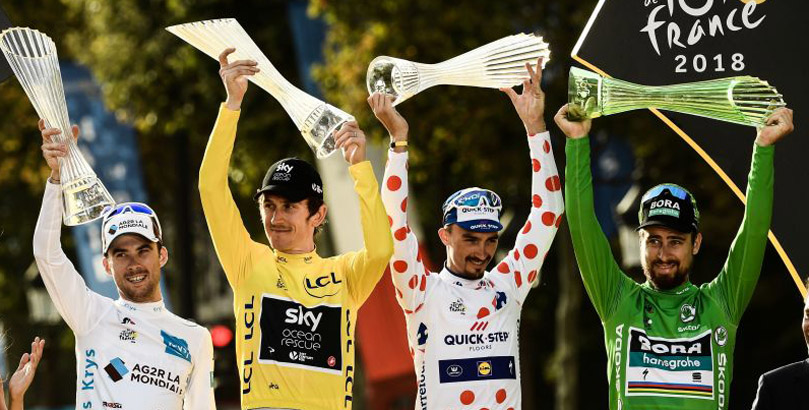 With stage one set to take place on Saturday, we’ve picked out our Tour de France 2019 predictions for the leading betting markets on this iconic contest.

The 106th edition of cycling’s blue riband event will depart in Brussels and finish on the Champs-Elysees in Paris on July 28.

Two British legends will be absent, with Chris Froome injured and Mark Cavendish not selected by his team, but here’s our top predictions from the Tour de France 2019 odds:

Geraint Thomas was a surprise winner for Britain 12 months ago and has obvious claims of retaining the title, with runner-up Tom Dumoulin and third-placed Froome sidelined this time around. However, Thomas also heads into this event under a cloud after crashing out of the recent Tour de Suisse, which was eventually won in convincing fashion by Ineos team-mate Bernal. The official party line is that both riders will compete on an even footing here, but the 22-year-old Colombian is definitely the man on the rise and seems better equipped to establish his superiority over Thomas in the mountain stages.

The Slovakian speedster made it six green jersey triumphs in seven years last term, having only lost out by being disqualified for dangerous riding 12 months earlier. Peter the Great will have the full support of a hard-working Bora-Hansgrohe team and has the all-round ability to compete for more prizes than most other sprinters. His form has been less convincing this season, with a run of three straight World Road Race Championship wins halted by Alejandro Valverde, but a recent Tour de Suisse success showed his well-being and the 29-year-old continues to look a cut above the rest.

Julian Alaphilippe dominated this classification last year, but we’re hoping Barguil can win back the polka dot jersey this season. The Frenchman was an emphatic winner in 2017 when riding for Team Sunweb, picking up two individual stages and also the combativity award. After switching to a new set-up last term, Barguil could only manage a distant second place, but the Arkea-Samsic team has been built around him and everything should be spot on after a French national road race victory.

How important is a good kit deal in football?
Irish Open: McDowell fancied to shine on familiar territory
Author